Jeff and I went away this past weekend.  Mom and Dad had offered to keep Ella while we took a trip to their trailer in the Outer Banks.  We left Friday night after Jeff got home from work and stayed until after lunch on Sunday.  We had a great time…Just us.  We felt a little selfish about leaving mom & dad to care for our child, but they made sure we understood that they were looking forward to a weekend with their granddaughter.

We ate (and ate and ate) at most of our favorite places.  We started at The Jolly Roger for breakfast on Saturday.  Then we drove down to the Hatteras Lighthouse, where Jeff proposed June 17, 2005. 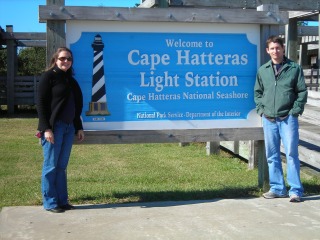 We stopped at Bodie Lighthouse and Coquina Beach on our way back up to the main drag of the Outer Banks.  We played Putt-Putt, something we LOVE to do together and have done since we were dating. 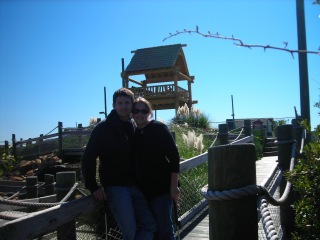 We ate lunch at the Beach Road Grill (Mahi sandwiches).  We shopped in the Used Bookstore.  Ya know, when we were dating we used to go to the Target near Willow Lawn and walk around, then next door to the Barnes & Noble and look at books for hours.  It was relaxing and we enjoyed spending that time together.  We looked at travel guides and picked out places we wanted to go.  We got coffees and just relaxed.  Granted, at the Used Bookstore there was no Starbucks in my hand or comfy chairs to get cozy in…but the feeling was there.  We were together, looking at books.
We went to the Home Depot and got a Hardy Palm (my pick) and a new doormat for our front porch.
We ate dinner at Barefoot Bernies – “our place” – which we discovered 3-4 years ago when the battery in the Jetta died the day we were supposed to come back to Richmond and we were trapped without a car for a couple days while one was ordered.  We walked everywhere we needed to go – including a couple trips to Barefoot Bernies to eat since that is close to the trailer.
I actually did not get my usual steamed sampler and ordered an actual meal this time.  I think I even shocked Jeff with that move.

Sunday, we got up and went to Dunkin Donuts for breakfast and then we visited the Wright Memorial.  We shopped at The Compass Rose for 75% off pots to use in our backyard and I got a new pashmina scarf that Jeff picked out for me.  And we played more putt-putt (five games in two days – Jeff winning three of them and me losing my title of “Champion”).  We finished our weekend with lunch at Goombays.

On the way to and from the beach we talked.  On the way home, Jeff specifically started talking about our relationship.  He went back to the beginning.  Nope…not our first date…the REAL beginning.

You see, Jeff was first introduced to me and my first husband when I was engaged to my first husband.  We met at Amanda & Adrian’s “villian” themed Halloween party.  It wasn’t a pretty night – I was sick…so sick!  I barely remember meeting him since I was nearly asleep on the couch while the guys played Star Wars Trivial Pursuit.  However, I was also dressed as catwoman so Jeff remembers me well.

A month after that, I got married.  I didn’t see Jeff again until that May when he was a groomsman in the Amos’ wedding and I was singing.  I was still married, though very unhappily.  I still didn’t pay much attention to the people around me…too focused on myself again and my unhappiness in life.  I do remember that he missed the rehearsal (ironically, my husband stood in for him) and barely made it to the rehearsal dinner.

That October we once again met up at the Amos’ Annual Halloween Party.  At this party, I asked him to flip my Corona for me since my thumb was too small to seal the mouth and get the lime to the bottom.  He obliged and again, ended up playing Star Wars Trivial Pursuit with my husband.  Such a strange, strange world looking back…

A month after that, I was getting a divorce.  It had nothing to do with anyone outside of my marriage, so don’t go getting any fancy ideas.

The week after announcing my separation I was substituting at Dumbarton Elementary and Leigh Foley pulled me into the clinic to tell me something that she was sure Amanda and Adrian wanted to tell me themselves, but she couldn’t hold it in…(I was sure she was going to tell me they were pregnant, but that wasn’t it)  She told me that one of their friends, Jeff, had a crush on me.  A crush that started way back at that very first introduction.  WHOA!
According to his friends, Jeff wanted to ask me to dance at Amanda & Adrian’s reception, but didn’t because I was married and his friends wouldn’t let him.  Talk about blowing your mind.

I know that it is somewhat disappointing to him, but I don’t count all of that in my story of our time together…regardless of how disappointing my first marriage was, I was still married and would never have even cast a glance in any direction – true now in my marriage to Jeff.

I first met (with eyes wide open) Jeff Cronin on December 1, 2000.  After Leigh revealed the secret to me, I called Amanda just to see what was up.  She and Adrian were estatic and immediately set up a night out – a huge group outing – to which I brought another friend as my “safety”.  We shot pool at The Triple and then decided to drive across the James to see the city lit up with Christmas lights.  Jeff offered to drive me and I ditched my safety and let her ride with the Amoses while I got in Jeff’s car.  Of course, we only drove to Jeff’s apartment and parked his car, then got into the backseat of Amanda’s beetle with my friend (yep- three of us in the backseat of a beetle) and headed across the river.  Since I was dressed to impress, I was not dressed sensibly…  Jeff, being the gentleman that he is, wrapped me up in his coat to keep me warm.
At the end of the night, he gave me his business card (with only his work number) so I could call him if I was interested.  I called Adrian the next day and got Jeff’s number at home.  I was definitely interested.

We went on our first official date on December 8, 2000.  Jeff took off from work early – something I didn’t realize at the time was MAJOR!  His friends nearly keeled when I told them that he picked me up before noon on a weekday (it was a Friday).  He brought me star-gazer lilies, which are now my favorite and were featured in my bridal bouquet.  We went to the Galaxy Diner for lunch and then walked around Carytown.  I still have the jeans I wore that day.  After hours of walking around we walked through the Fan to Video Fan to rent a movie (Shakespeare in Love which Jeff will never watch again) and then headed to his apartment where he cooked me dinner (Shake-n-bake Chicken).  We talked and kissed and snuggled on the couch until late and then he drove me home.  I later discovered that taking me home so late on a weekend night meant that he had to park about seven blocks from his apartment when he got back home.  Thankfully, he thought I was worth it.

We had a fun courtship that included a camping trip in the Outer Banks after we had been dating for just five months.  Seriously – I went tent camping with this guy so you know I was trying to impress him!  He was my date to Josh & Ellyn Foshay’s wedding at the end of that week of camping.

On our trip this weekend he asked me when I knew that I loved him.  I didn’t answer his question well.  I obviously had very strong feelings for him before that camping trip because in the weeks following it I was put in the position by a couple friends to choose between them and Jeff.  You can see who I chose.

I know I was in love with him before that year’s Halloween because I was sitting next to his friend Chris at the Amos’ annual party when I told Chris that I was in love with Jeff.  I hadn’t told Jeff yet.  I didn’t tell Jeff until Jeff said those magic words to me first.  I used to be able to quote the date, but I can’t remember that any longer.  I just know where I was when I heard them.  It will always stay with me.

The first three songs on the playlist today:  “To Make You Feel My Love” (sung by Adele), “When You Love Someone” (sung by Bryan Adams), and “That’s How You Know It’s Love” (by Deana Carter) took on new meaning when I was dating Jeff.  I had heard them all before dating him and I had always loved all three of them, but suddenly with him…they meant so much more.  I knew what we had was special – legendary – the stuff they write love songs about.

There was a time in our relationship when Jeff was unsure of our future.  That was a scary time for me, because by then I knew that I loved him totally.  About that time the movie “Hope Floats” came on t.v.  I’d seen it and I really liked it, but one of the songs from the movie stuck with me.  Because I was sure of what Jeff and I had, even if he wasn’t and the song put into words exactly what I was feeling:

Honey, I can’t tell you the moment I fell in love with you, but I can tell you that it couldn’t have been long after we started dating.  You were my “Mr. Wonderful” and I could see our future before you could.
And look at us now…I wouldn’t change a moment of my life before you because here I am with you now…married…with Ella…perfection.

I know I don’t always make you feel my love in the best way, but I do love you more today than yesterday and I will love you even more tomorrow. 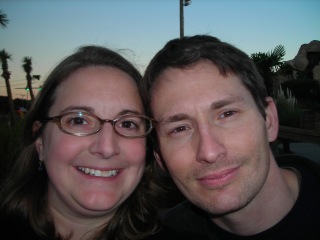 I'm a follower of Jesus aiming to be more and more like him each day. I'm a woman who is far from perfect and often question if I know what I'm doing at all. I'm a daughter who lost her daddy on Nov 5, 2018 and I'm learning how life works when your daddy dies. I'm a daughter whose very best friend is her mother and she'd have it no other way. I'm a proud sister of a humble man who has all the best qualities of their daddy. I'm a mess, but God uses messes every day to spread his message. View all posts by Evelyn Louise

2 thoughts on “Profession of Love”