Yes, Ella and I are alive and well!

First let me apologize for dropping so suddenly off the grid – which I may do anytime since I’m less than an hour away from feeding Ella (it is 10:06 and she is due to feed at 11) and she tends to want to go a little earlier.  If she wakes before 11, I may be pulling mom duty at the computer.  She is making a bit of noise through the monitor right now, but not crying yet.

On November 3 I went in to see my nurse practitioner following an ultrasound.  My blood pressure had been up and they wanted to be sure everything was okay.  She was pleased that my bp was down a bit and that the ultrasound showed that all was well inside.  There was concern that Ella was heading towards being a big baby.  When I left that Monday, I was told that she was going to share her findings with my doctor, Monica Powers, and that my nurse, Becky, would be calling to let me know if Dr. Powers wanted to see me sometime later that week.

Well, Wednesday I had a vet appointment scheduled for Maggie – I was trying to get everything in that needed to be done prior to having the baby.  Becky called as soon as the office opened and asked if I could come in that day at 1:30 (the same time as Maggie’s appointment).  I had not been feeling great and dad was coming to help me with Maggie, so I kept dad on schedule and canceled Maggie – who has yet to be rescheduled – and let dad take me to the doctor instead.  Before he came, I took some last pictures of myself in my Halloween “costume” and of my 39 week belly: 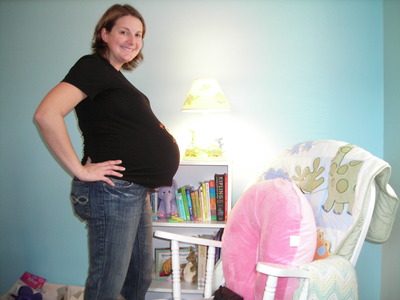 On the way to the doctor, dad kept joking that I was going to be admitted.  I told him that even if she decided that it was time for Ella to come, she’d probably send me home to get my stuff together and then come back later in the day.  After weighing in (a whopping 168 lbs) and peeing in the cup, Dr. Powers came in and took a look at where I was.  I was almost fully effaced and Ella had dropped, but I was still less than 1 cm dilated.  That wasn’t the problem, though.  My blood pressure was higher than it had been and there was protein in my urine.  Two big no-nos that indicate that I could have preeclampsia.  She determined that not only was it time for Ella to get out of that environment before it became a bad one, but that the time to admit me was RIGHT THEN!  Good thing dad drove me!  As she went to fill out the admitting information, I called Jeff at work to let him know.  Soon, a wheelchair arrived and dad and I were moved over to the labor & delivery room that I’d be spending the next 24 hours in.

They broke my water and induced my labor (yes, I know – a lot of you are very against this.  Let me remind you that my doctor has delivered hundreds more babies than I have and we were both hoping to avoid any type of interference from her.  However, my womb was becoming a not-so-friendly environment and Ella’s health was more important than anything else.  And yes, I got pitocin.  It was given to me at the lowest dose possible and only increased to keep my contractions where they should be).

Jeff arrived a short time later and I was set.  Mom and Jeff were going to be participating in the delivery along with my labor/delivery nurse, Ashley, who just graduated in May.  Let me say right now that she is the BEST nurse I have ever been exposed to.  She has had women request her as their nurse based on the recommendations of friends and I can honestly say, I agree.  She is amazing.  She told us that the earliest Ella would arrive was around 4:00 a.m. – meaning a 12 hour labor – so we sent everyone home except me, Jeff & mom.  (Everyone was my dad & Jeff’s parents).

I caved and got the epidural around 7:30 (meaning I caved at 7:00) and it was happiness all night long.  I didn’t sleep too much, but I did get more rest than Jeff or mom who at one point were sharing the couch (heads at opposite ends).  Now that was a funny sight.  Had I had my wits about me, I would’ve asked for the camera to prove it at this stage.

Around 4:30/4:45, Ashley decided it was time for me to start pushing.  She prepped everything that would be needed and around 5 a.m. I started the real work of delivering a kid.  Mom and Jeff were great cheerleaders.  Mom was the drill sergeant telling me not to let up and Jeff was the loving voice in my ear, helping me by holding my back and telling me what a good job I was doing.  At 6:00 they sent for Dr. Powers (who happened to have been on duty that night) and
at 6:21 I had a beautiful 7 lb, 12 oz baby girl:

For the past three weeks (TODAY was Ella’s 3-week birthday), Ella and I have been figuring out life on the outside.  The first week, mom stayed with Jeff and me and helped us with cooking, cleaning, and being an extra set of hands and good advice.  It was scary when she left, but we picked up and have been great (except for some feeding issues to be addressed another time).  Ella and I stay at home together and we’re really starting to get into a groove. We’ve even been shopping several days, though we’ve yet to hit the grocery store yet.  There are still times that it seems so strange that I am a mom!  This is my perfect little angel – no one is coming to pick her up at the end of the day.  She is the creation of Evelyn & Jeff Cronin – FREAKING COOL, man.

Today was Ella’s first Thanksgiving.  Wow!  I have so much to be thankful.  Most of all, my family which now includes this amazing little girl.

When she was 8 days old (she hasn’t changed too much):

Getting ready for our first Sunday at church: 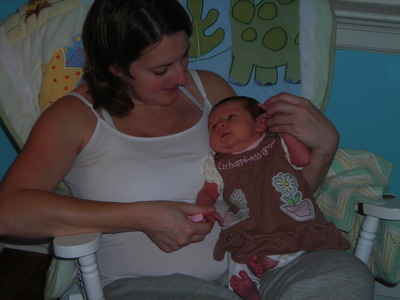 Going into the nursery with Granny Mac (getting kissed by Connor Coppedge):

Seeing Pop at church on her first Sunday:

Well, she is now squirming (oh, I went and got her about 30 minutes ago) and it is about time for her to eat (7 more minutes).  I’ll try to post again soon and I may make it to Facebook and MySpace before the night is through.  For some reason, I have more energy tonight than I’ve had since I’ve been home.  I do need to sleep because tomorrow is Thanksgiving at my Granny’s in Newport News.

Thanks for all the loving support!  We’ll be online again soon!  Maybe Monday.