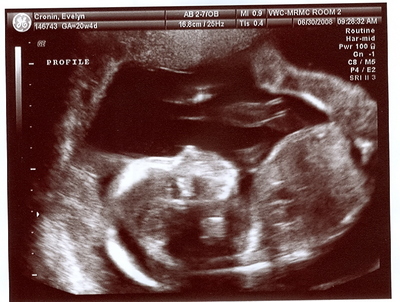 See the feet?  One is clear and the other is to the right. 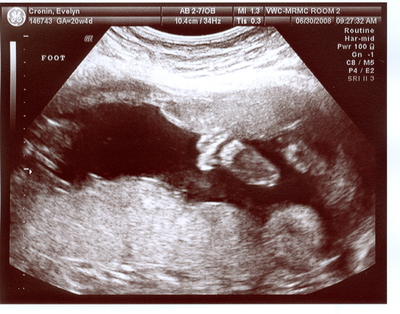 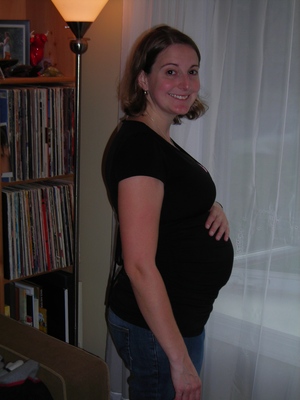 3 Days Until We Know Boy or Girl!

Your baby weighs about 10 1/2 ounces now. He or she is also around 6 1/2 inches
long from head to bottom and about 10 inches from head to heel —
the length of a banana. (For the first 20 weeks, when a baby’s legs are curled up against his torso and hard to measure, measurements
are taken from the top of his head to his bottom — the “crown to rump”
measurement. After 20 weeks, he’s measured from head to toe.)He or she is
swallowing more these days, which is good practice for his/her digestive
system. He/She is also producing meconium, a black, sticky by-product of
digestion. This gooey substance will accumulate in his/her bowels, and
you’ll see it in his/her first soiled diaper (some babies pass meconium in
the womb or during delivery). 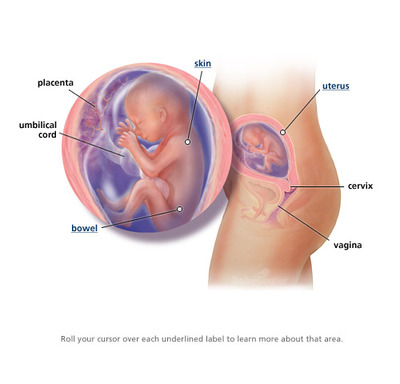 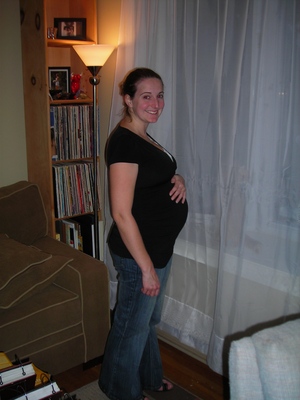 Sorry if I look tired!  I had worked a LONG day & helped with dinner.

Your baby’s sensory development is exploding! Her brain is designating specialized areas for smell, taste, hearing, vision, and touch. Some research suggests that she may be able to hear your voice now, so don’t be shy about reading aloud, talking to her, or singing a happy tune if the mood strikes you.

Your baby weighs about 8 1/2 ounces and measures 6 inches, head to bottom —about the size of a large heirloom tomato. 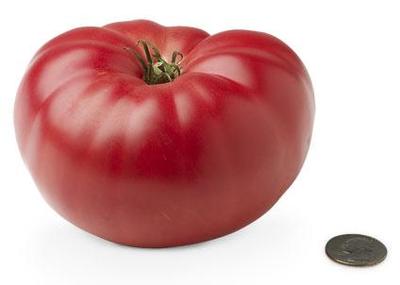 Her arms and legs are in the right proportions to each other and the rest of her body now. Her kidneys continue to make urine and the hair on her scalp is sprouting. A waxy protective coating called the vernix caseosa is forming on her skin to prevent it from pickling in the amniotic fluid. To answer a big question I’ve received from people:
YES, I am keeping all four of my cats!  I feel that Jeff & I are responsible enough to keep their claws trimmed and to keep them from sleeping with the baby.  I understand from quite a few people who have had a child that my cats will no longer be the “children” that they are now, but they are still four excellent loving creatures that we have raised and love and they aren’t going anywhere!
Strangely enough, no one asks if I’m getting rid of my dog.  I guess dogs are more acceptable as pets when one has a baby?

1. Have you noticed that the picture of the 17-week baby looks a lot like an alien?  Seriously, I know my kid’s head is out of proportion with the rest of its body right now (and will be at birth, looking at some baby pictures), but can’t we make it a little less odd looking?

2. I posted that I’d felt the baby, but didn’t describe what it felt like.  It does feel a little similar to gas, so I can see how people mistake the first movements as such.  I’ve heard the description of this first feeling as “butterflies” or “popcorn”…well, folks, mine felt like someone had rolled up some bubblewrap and twisted it so it popped all at one time.  It really was like a crackling sensation near my right ribcage area.  So weird!

3. I’m very quickly becoming a vegetarian (who eats seafood).  First meat to go was chicken, then pork chops, then bbq, and now it appears as though steak is leaving my list of acceptable and desireable foods.  I want rice, beans, veggies, and fruit more than anything.  So this little one is getting its protein from black beans & eggs at this point in time.  Now, the three times I’ve attempted steak in the last two weeks have all been seasoned steak.  Sometime this week (or next weekend) I’m making the trip to my local Golden Corral for some plain old steak and some A-1 sauce and see how I do.
Please keep my poor husband in your thoughts.  I isn’t just that I don’t want to eat any of the above mentioned meats – I don’t want to prepare them either!  I did cook chicken and split a dinner I made last week so that his half had chicken in it, but man was that disgusting!!

4. I’m tired & HOT (we’re setting records here in RVA).  I never planned on being pregnant during the summer and now I realize why.  God bless my mother for having my brother in AUGUST!  Warren, I hope you are extra good to mom on all future mother’s days because I can’t imagine going through this weather at 7 – 9 months!

Love you all!  Thanks for checking in!! 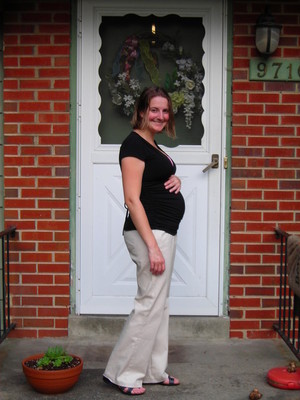 Your baby’s skeleton is changing from soft cartilage to bone, and the umbilical cord — her lifeline to the placenta — is growing stronger and thicker. Your baby weighs 5 ounces now (about as much as a turnip), and she’s around 5 inches long from head to bottom. She can move her joints, and her sweat glands are starting to develop.

17-week picture from Baby Center (looks a little like an alien, doesn’t it?) I promise to take a 17 week picture tomorrow, but will post it in the blog because I love my current profile picture.

THE DATE IS SET – We will (cooperative baby willing) find out if we’re having a boy or girl on Monday, June 30 @ 9:00 a.m. ~ well, shortly there after.
I’m actually getting excited to know & I’m counting down the days!!!  After telling family & close friends, I will post the news online – on all three sites (here, facebook, & MySpace).

Life is going well and tomorrow you’ll get the 17 week update.  Keep me in your prayers, though.  I’m also getting the worries about things going wrong.  A girl I used to attend church with lost her baby at 20 weeks due to the lack of amniotic fluid.  So far, I’m looking great in that area, but it is still scary.  Another woman who was at RBC during my year there is having quite a lot of difficulties (including lack of amniotic fluid), but they seem to be handling her situation well and the baby should be viable even if it is early.  A friend from church had her baby this past weekend at 35 weeks due to toxemia.  Being surrounded by so many crazy pregnancies, I can’t help but to worry.

Grete – great call on the baby in my last post looking like it is praying.  So funny!

So, here I am working crazily at work, but taking time to sit quietly when I can and try to feel the “butterflies” or “popcorn” sensations that describe the first movements the mom feels.  I think I’ll have less worries after I can feel the baby moving around in there.
Funny story from my mom:  Mom was teaching fourth graders one day while preggers with me.  Apparently as she is standing in front of the class, my foot stuck out enough to show through her clothes and I moved it across her belly.  The whole class saw it and reacted!  Talk about teaching a lesson to 10-year-olds that you aren’t planning on teaching!!